This CD player was built in 1986 and retailed for $400. It is nicely built, but not nearly as sophisticated as the Sony CDP 650ESD that graced these pages recently. 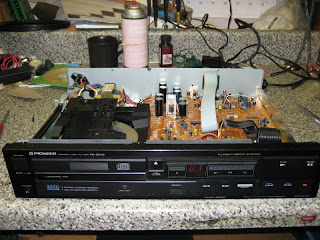 This post is mostly an excuse to share this link and this second link. These sites contain pretty much identical lists of cd players and identifies their DACs and transports. Cool, but why? you ask. 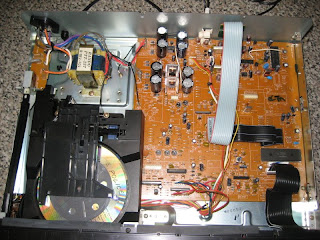 Well, some people are really obsessive about their DACs and transports. Just google TDA1541 and see what you get. 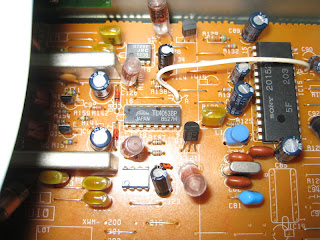 For the record the PD 5010 uses the Sony CX20152, a dual, 18 bit, two times oversampling DAC. You can see it at the right, above. In the previous picture it is in the far upper right. Note the nice film caps in the output stage to the left of the DAC. The clear ones are styroflex.
Posted by Nat at 10:02 PM 3 comments:

Li' Mar: Making the Best of a Difficult Situation

Ahh, we are back to that troublesome little Marantz, are we? Yep. She has not been forgotten, although it has been tough to tell from this blog. I have been avoiding her.

In our last adventure (It was when??? October??) we made some progress by pulling a wobbly post off the preamp board. That solved a problem, but progress always seems to be followed by a setback with this amp.

Way back in August (!) I had recapped the amp board, and I vaguely recall checking the output transistors, but evidently I was not exactly thorough. With the preamp playing a bit better it was clear that the left front channel had an odd distortion. Mike ran it through the ocilloscope and exactly half of the wave form was missing. Literally. One of the 8 outputs was bad and I had either missed it or it had recently failed. Its mate was working on the positive swing, but the zero line was as far as the signal went. 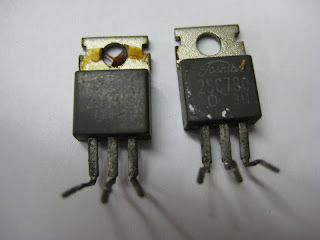 When one is bad, replace them both.

Here is the board, pulled yet again. The replacements are the clean ones at the left. 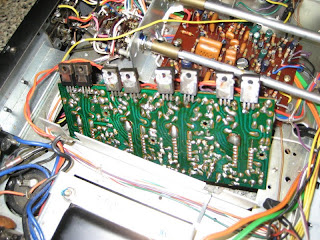 Here is the heat sink and goo, the imprint of the dead output is the incomplete one at the top. Hmm, maybe it didn't seat well enough... No need to wallow, there is more trouble ahead! 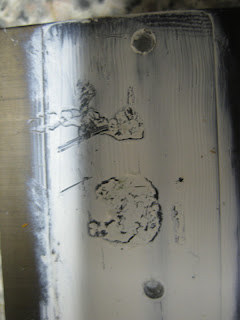 Replacing an output isn't particularly difficult, but what followed was.

The preamp board: what a pain in the butt. The front channels seemed ok, although once in while it seemed... off. The rear channels were maddening. The treble was behaving like a combination tone control and volume pot all in one. The signal would disappear. The bass pot was more stable, but every once in a while it would distort. Maybe it was salvageable, but that treble pot was more a 'trouble pot'. I chased bad solder joints and bridges for far too long, and finally threw in the towel.

I talked all this over with Mike. His strong suggestion was to cut my losses and just run both front and rear outputs with the front section of the preamp. This was a very easy modification, but I really didn't want to sacrifice the quad features of this amp. I was hoping we could just jumper the rear channel treble pot and salvage as much as we could. Mike did not like this idea at all, too complicated and too many problematic components remained in circuit.

Before we could decide on a plan of attack, life intruded, and Mike had to leave for several weeks to visit his father in Midland. This has been a very tough year on our parents.

This past Saturday we finally had a good day on the bench. We settled on a reasonable plan of attack, and most importantly, Mike did most of the dirty work. So, next time, I promise I will have some good news about Li'l Mar.
Posted by Nat at 8:03 PM 1 comment: