A Rarity and Something of a Mystery: the Pontus Receiver

A while back this walked into Austin Stereo: 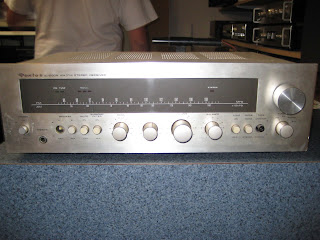 This somewhat scrufty, Korean made Pontus IC-200R receiver has all the earmarks of a house brand. Build quality seems very respectable. This could be akin to the more than respectable Concept line of receivers that were also made in Korea. There is next to nothing on the web regarding the Pontus line.
Posted by Nat at 5:15 PM 7 comments:

European made components are rare in the US. I recently restored two small, presumably late '60s integrated amplifiers. Their construction is significantly different from Japanese components, but of high quality. 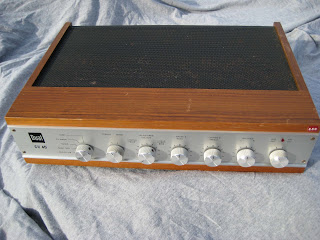 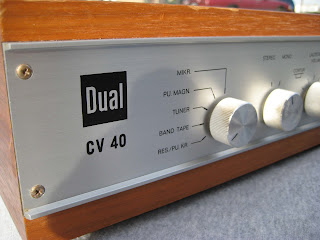 Dual is very well known in the US for turntables, but I have never seen a Dual amplifier other than this one. I am not sure Dual actually was the manufacturer, and wonder if this is a actually a relabeled Braun. The CV 40 is presumed to be about 20 watts per side.

Here is a view of the innards: 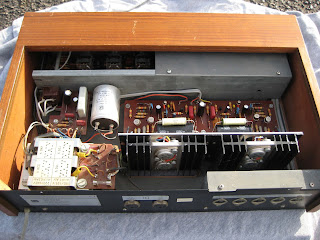 This is a very simple amplifier, but built with very high quality components. Caps were for the most part axials of values not commonly used today. I left intact the very nice power supply cap bolted horizontally to the inner frame. I replaced each of the main filters just behind the heat sinks and strapped them with a Russian made polystyrene cap as a bit of a tweak. 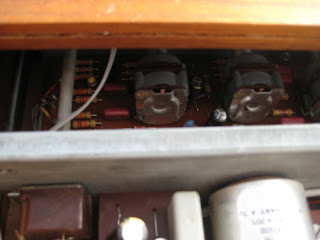 Note: the Dual's potentiometers at the top of the photo above are of very high quality with cast frames.

Next is the Philips 520 amplifier, with marvelous pair of round meters at the left of the unit: 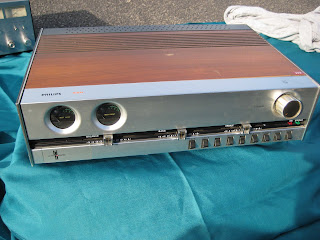 Balance, bass and treble are sliders at the middle of the unit. Here is the amp with the top off: 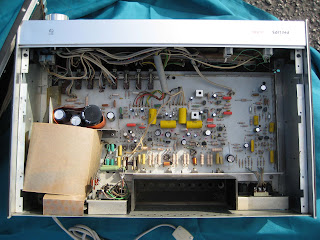 This amp was roughly as simple as the Dual, but with a nice helping of film capacitors, in yellow above. I replaced and beefed up the main filter capacitors at the left of the photo above. The phono section is at the right of the board. The modest number of Philips electrolytic caps replaced were kind of cute: 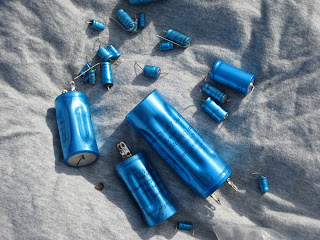 Both amplifers sounded great after restoration, despite, or perhaps because of, very simple contruction. Solid state gear manufactured in the 1960s typically has a poor sonic reputation, but these ended up as smoothly musical with a nice helping of slam. It is not clear to me that this early gear truly sounded bad when new, nor does this seem reasonable for all cases. It is not surprising that early designs were relatively unsophisticated. However, unsophisticated is not necessarily bad. The audiophile beloved Advent 300 is a simple design that sounds great. Proper evaluation of vintage gear needs to be done with restored units. An amplifier with 40 year old capacitors will not sound nearly as good as when new.

On the other hand, it should also be pointed out that the replacement of aging capacitors with new can never exactly reproduce the original circumstances of manufacture. Modern caps have tighter tolerances, lower ESR, and in many instances cannot be found in the same voltages as the original caps. For example, Panasonic FCs of 10 mfds or less are available in 50 volts or more where lower voltages might have been used in a vintage component. To complicate matters, I tend to use higher voltage caps in general, especially in power supplies. And beyond that I often increase the capacitance value itself in power supplies. Typically, restored power supplies have a better foundation than as manufactured. Occasionally I add a tweak as described above, sonic value unknown.

The build quality in 40 year old components tends to be much higher than that found in contemporary consumer audio gear. I am of the opinion that the conventional wisdom that early solid state components are not worth restoring is often incorrect, and that these vintage units need to be restored before rendering judgment. Both the Philips 520 and Dual CV 40 amplifiers are worthy restoration candidates.
Posted by Nat at 4:54 PM 9 comments:

In our last episode of Soldering Iron Justice, our intrepid technician was befuddled by a capacitor that was really a thermistor. Could the part be located? Would it in fact enable the repair? Could sonic mojo be restored to the Stax Earspeaker Energizer, SRD-7? 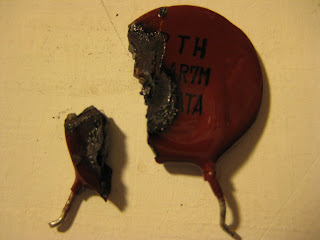 It turns out, the answers were and are: yes.

Mouser Electronics to the rescue! They sell Murata thermistors, in this case 4.7 ohms @ 140 volts. They are a fraction of the size of the torched thermistor, but I can live with that especially since the prior examples were bent to fit and one lay across a wire wound resistor which contributed to its demise. I purchased 2 for the sake of symmetry, a buck each.

My original effort on the SRD-7 was to replace the pair of 1 mfd 160 volt electrolytic caps with fairly compact polpropylene 250 volt caps. The new thermistors were a bit tricky to install because they were nearly too small for the leads to reach, but with a bit of gentle coaxing they reached and the solder grabbed. 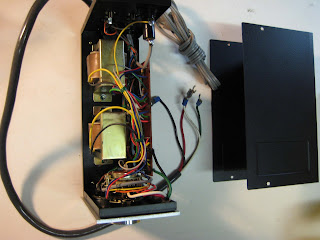 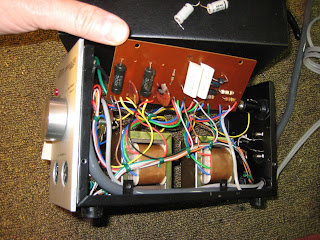 In the photo above, the thermistors are the brown disks above the left hand transformer. The right one is torched. A black wire wound resistor is next to each thermistor. The 1 mfd film caps are the white lozenges in the middle of the board. The small, loose caps at the top were the originals, now removed. Time passed... and the thermistors were subsequenty replaced.

I brought the SRD-7 up on the variac without any smoke so I hooked up the pair of Stax SR-X Mark 3's. The energizer was driven by the trusty Advent 300 and when it was lit I heard sweet, sweet music. 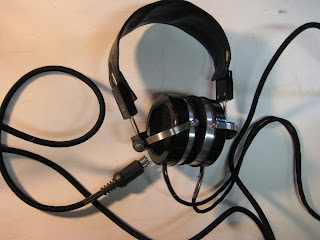 Electrostatic headphones are ear candy deluxe. If everyone on earth had a pair connected to an Advent 300 there would be no war. Tripping Daisy would be everyone's favorite band. The sound is effortless and extended. Listening to Austin's classical station, KMFA, I could clearly hear the crappy digital sideband hiss, but the music sounded so good I really didn't care. I am not sure I can give higher praise without an eargasm.

Given the age of the SRD-7 (introduced in 1971) it would seem to me that the first order of business for anyone who owns one should be to replace the two electrolytic caps. I also wonder about the location of the thermistors since the originals are large and easily bent over to touch the large resistors next to them. Not good. Only 4 screws separate one from peace of mind, so open it up and make sure the thermistors are not bent over, touching the resistors. Only 2 more screws need to be removed to actually work on the unit.

If you have a chance to acquire a pair of Stax headphones, I highly recommend that you do. You will thank me. And you're welcome. 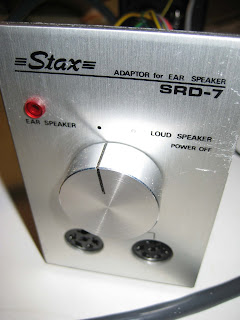