A Brick Armadillo, White Light and the President of Bolivia

The Club House needs a bit of cleaning these days, both literally and figuratively. Tropical storm Hermine put 10 inches of rain on my house and 2 or 3 inches managed to make it inside, so life has been a bit complicated lately. But even before that the blog was suffering from projects set aside and articles abandoned. Maybe more details on that later, but for now it's time for a bit of catch up.

If you are an Austinite of a certain age you will know what this picture is: 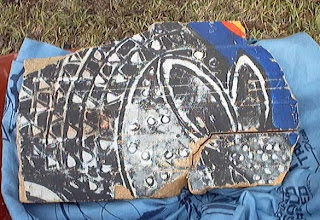 This is the lead armadillo in the herd that adorned the wall in the late lamented Armadillo World Headquarters. The Armadillo lost the battle with Austin's high tech progress and the property was sold and replaced with a high rise office building. The contents were auctioned off and the building was demolished in early 1981, and my good friend Rob Haeuser grabbed the above in a daring daylight heist. I trust the statute of limitations for brick theft has passed.

An update from Rob, slightly edited...

The bricks were paid for, albeit reluctantly, by my ex-wife, aka the ***********  from ****. We were in separate cars, and met at the demolition site.  I rooted around for a couple of good bricks, and stumbled across a chunk of about 15, lying face-down.  When I flipped it over I nearly died!  So I hustled the chunk into my trunk, and the  *****  headed to her car.  On the other side of the site a guy in a pickup started yelling “It’s a buck a brick!”  I headed off in one direction, *****  headed off in the opposite direction, and the guy jumped in his pickup and followed her.  She pulled up to a red light, he hopped out of the pickup and ran up to her window, she rolled it down an inch, and handed him a five.  Needless to say, I reimbursed her!  So what a deal: 15 bricks at 33 cents a brick…"

Rob sometimes gives the impression that his divorce was not an amicable one...

This world is full of all sorts of odd connections of the Kevin Bacon sort. One of the occupants of the high rise built on the ashes of the Armadillo was IBM, and at the time they employed the future President of Bolivia, Jorge Quiroga. Jorge was part of a team that sold the state of Texas a large number of first generation PC AT's for a project that employed me then, and somehow employs me now. Jorge was an interesting guy and mad about soccer.

But I digress. Rob was (and will always be) a musician, and like most musicians he has a story about how he came that close to getting the big break. His band was called White Light and the big break that almost happened was a too brief connection with Bill Josey, founder of Sonobeat Records. Bill produced Johnny Winter, a very young Eric Johnson and a host of other Texas musicians. He passed away in 1976 after producing a demo tape for White Light. The tape disappeared for literally 30 years and, well, follow the links above and this one for more of the story.

I have to wrap up this little bit of unfinished business for now, but there are several stories in the above that deserve to be pursued. Austin is like that, lots of old business that needs to see the light of day. With luck I will get to these and a few more, including one very interesting one involving Janis Joplin.

Snap Out of It!

Life has taken a few twists and turns around The Stereo Club and the blog has suffered. The last post was way last February, and blogging was sparse for months before that. That's just pathetic.

Well, today I was moping around the house, thinking about the blog I have neglected, and realized it was time for an intervention. I needed someone to step up, get in my face, and let me know what I needed to do.

And then it hit me:

Thanks, I needed that.

I confess that Cher has been one of my musical guilty pleasures, and the Moonstruck Cher just looked great. However, like many males in the late 70's, I found this Cher... er, intriguing: 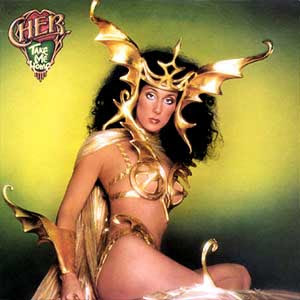 Remarkably, this album is titled 'Take Me Home'. Ahh, sure.

On the other hand, this Cher was just scary:

What was she thinking? If you know, please don't tell me.

Of course, Cher got her start with former Phil Spector go-fer and future Republican Congressman Sonny Bono. Sonny co-wrote 'Needles and Pins' with Jack Nitzsche and I thank the both of them for that.

And he also wrote and produced this classic number, perhaps the first work in the rock genre to feature an oboe hook:

This Shindig clip from 1965 featured a doofy looking Sonny in his caveman outfit, but the song was very catchy, and Cher looked great and could sing.   I was hooked.

Anyway, I hope Cher has snapped me out of it and the blog is back. I have tons of catching up to do...