Rollin' and a Tumblin' at Ronnie Scott's

Fellow blogger Bill (hmm, there's a blues lyric in there somewhere) recommended the Jeff Beck at Ronnie Scott's DVD with his highest praise just the other day. And then I stumbled on this number with Imogen Heap on vocals. Stellar guitar work from Beck and I have been a fan of Heap's since her Frou Frou days. She is not a blues shouter but the visual and vocal counterpoint works well. Beck's never been a beaten path sort of player and this collaboration with Heap is inspired.

Beck has long been a favorite. I saw the first two Beck, Bogert and Appice performances live in London in '72, and again that following spring in Syracuse. They were fronted in the 'Cuse by Wet Willie, a bit of creative scheduling that left me baffled. Jeff Beck having to follow a group named for sticking a saliva gobbed-finger in someone's ear, what was the world coming to? Keep on Smilin' I was not.

Ok, now for a bit of wallowing in the '70s. First up, my initial encounter with Stevie Wonder's Superstition was this one:

That's Timmy Bogert and Carmine Appice backing Jeff Beck. I had been a Vanilla Fudge fan and this other band featuring Bogert and Appice:

Rusty Day was on vocals and Detroit's own Jim McCarty was on guitar. I caught Cactus in '71 at the Syracuse War Memorial, following Chase (!) and before Black Sabbath. Great seats and a great show.

I Buy My Dehydrated Boulders and Integrated Circuits From Acme

The Acme Company is the source of the amusing products that Wile E. Coyote uses with less than stellar success in his pursuit of the Road Runner. While they do not sell rocket sleds, Acme Enterprises of Orlando does supply name brand integrated circuits at reasonable prices and with good service. They evidently got their start supplying large hotel chains with the quality parts they need to maintain the gazillion room tvs they own. Who knew?? Someone actually fixes tvs.

I can also recommend their Quick Braid solder wick. I am not sure it is exactly Chem-Wick quality, but it is certainly close enough that I can happily pocket the savings and not worry about it. Good wick makes for tidy work. Or something like that. It certainly makes the work go faster. Anyway, Mike approved and he uses this stuff in feet per day. The big 100' spool will last me a year.
Posted by Nat at 9:00 PM No comments:

Lil' Mar is a petite Marantz 4220 quad receiver from the mid '70s. Or, as the faceplate says: 'Stereo 2 - Quadradial 4'! Orion says it was sold from 1974 to 1978 and retail list price was $329. The more authoritative Classic-Audio.com says it debuted in '73 and listed in '74 for $299. It was the smallest and lowest powered Marantz quad receiver. Orion says it packs 15 watts per side (stereo, I assume), but Classic-Audio.com lists it at 2x20 or 4x8. It is not exactly a powerhouse, even by the standards of the mid '70s, but I imagine it would drive a dorm room 2 channel rig quite nicely. As for quad, I hope they chose their speakers carefully. 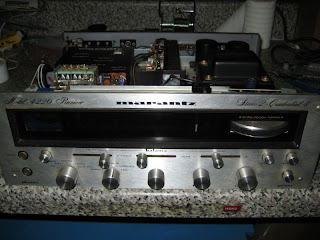 My initial listen was not particularly favorable. One channel was down in volume and noisy. At the very least I wanted a stable amp that would play vinyl well, so recapping the phono, regulator, and output sections was mandatory.

Cramming 4 channel gutti-wuts into such a small space required some engineering trickery. The regulator was relatively easy to access at front right, but the amplifier was going to be a bit complicated. The heat sink occupies the center of the unit with the board on its left. This is not a pop-out like the wonderful Marantz 2275. It's more of an unscrew/tug/unscrew sort of effort so I decide to procrastinate a bit and save it for next time. In the photo below the tuners are at the left, nicely shielded as Marantz is wont to do. 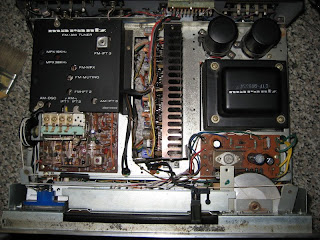 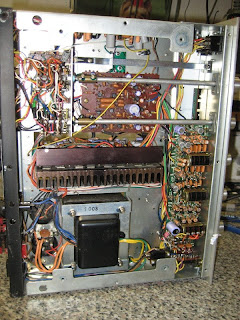 Underneath you can see the preamp/tone control circuitry at the right, behind the faceplate. It's a bit daunting. The board just above the heatsink is the SQ quad circuit board. All the way at the top you can just make out the phono board, facing down.

I removed the two screws on the regulator and recapped it with Panasonic FCs and FMs while it was still tethered to the wires connecting it to the rest of the amp. They were a bit short, so it was a bit awkward soldering. If that engineer had specified just another half inch of wire I would have complimented his foresight at this time. But, no.

The phono section was much of the same: two screws and some tugging. It is mounted to the side of the chassis, under and to the left of the tuners. Marantz phono sections tend to have a significant number of film caps, but not this one. It has 8 electrolytics, 4 films and 4 ceramics. If I recall correctly, the 2275 has a single electrolytic cap in the phono section. So I could feel good about myself I replaced the two output coupling caps at the far right with Elna Silmics at 22 mfds instead of 10. The rest were replaced with Panasonic FCs. Here is the phono board 'before'. 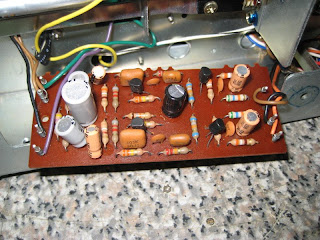 All in all, I replaced 12 caps, fired it up and the amp was stable. So step #1 is complete and the next trip to the bench will deal with the amp itself.
Posted by Nat at 6:40 PM No comments:

Cleaning Up the Archives: The Sony ST 4950 Tuner

I checked out this acquisition a few weeks ago and have been in a lazy funk due to the systemic shock of 8 to 5 employment. And you know what they say about procrastination... Anyway, the archives have now been diminished by one.

The ST-4950 is a handsome tuner, and is really a surprising cosmetic given the vintage. According to the wonderful FMTunerInfo.com it was sold in 1977 for $350, but the matching TAN-8550 power amp (coming soon!) service manual in my possession is dated 1974. I think this cosmetic is a forerunner of the early '80s look, although better executed than those that followed. 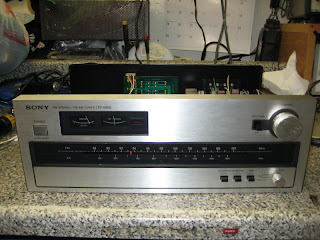 After a scrubbing the garage grime off the exterior, I popped the top prior to plugging it in. A visual inspection can save some heartache and it might have in this instance. The cap at the far left was visibly leaking so it was replaced. I squirted a few switches and the tuning capacitor with Deoxit and fired up the unit. 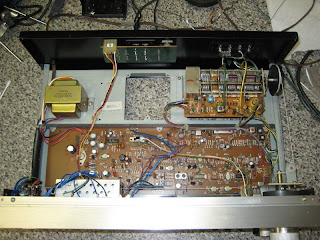 Oh yeah, what about that honking big hole in the chassis? I should point out that most of this line of tuners featured the now obsolete Dolby FM. This particular model did not, but I presume it shared a chassis with either the 3950SD or the big dog 5950SD that did. In this case less is more and the lack of Dolby is a good thing. 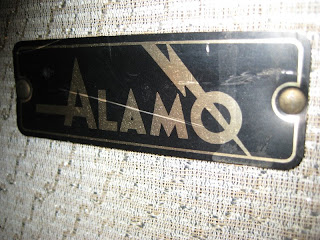 Time for something completely different, music creation instead of a music reproduction! Tube instead of solid state (mostly)! Here, in Fenderish garb is the 4 tube, single ended 6V6, Alamo Jet from around '65 to '67: 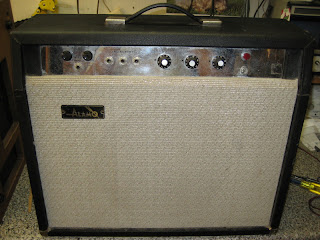 Alamo Electronics was based in San Antonio (natcherly) and had an interesting history from '46 through about '82. As far as I can tell Alamo was never a premium manufacturer, but their amps have acquired a following, especially here in the Lone Star state. The Jet seems to fit nicely as a harp/practice/small venue blues amp. 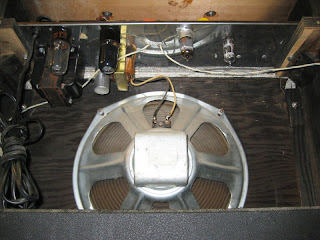 This amp was in very respectable and original shape, but the last time it was used by one of the boys it was a bit noisy. That was quite a while ago, and I was nervous about firing it up without at least a basic refurb. So it was time to hit the bench.

This is a very basic point to point amp with a minimum number of caps. The 3 section main filter can was a 20@450v/20@450v/20@25v that was in marginal shape. The high voltage sections were hanging in there but the 25v section read high on the ESR meter. Forty year old electrolytics make me nervous so the can had to go. I resolved to just bypass it with caps under the hood and made the mistake of asking Mike how he would approach it. Mike whipped out the big clippers and popped the 3 tabs under the hood free. I really have to quit asking questions with obvious answers. 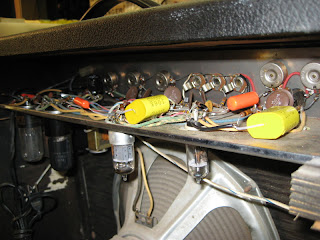 The amp powered up nicely on Mike's Sencore Powerite and was stable, so tomorrow we will see how it sounds.

One note: the several solder points to the chassis were extremely tough to melt. It takes a hot gun to make headway on this amp, I guess the chassis functions as a very big heat sink.

Interestingly, I could not find a Wikipedia entry on Alamo. C'mon guys. But I did find several very useful links. Here is a part 1 of a very good history of Alamo Electronics in Vintage Guitar. And here is part 2. This article indicates '65 marked the transition to the black tolex, so the would be the earliest date of origin for my amp. The part 2 model summation seems to describe my amp cosmetically as in the '65-'66 range but it definitely has two small transistors in the tone control circuit. And it is missing from '65 line up, but I would think that is an omission. Maybe. The early '70s seems to be the transitional period for solid state, so it beats me as to the vintage of my Jet.

And here is a much more thorough restoration/augmentation of what appears to be a bit later version of the Jet, model 2564. My Jet was missing the sticker on the inside so I am not sure of my model number. Evidently Alamo was a bit cavalier with their names and model numbers.

And here are some good pictures of what I also assume is a later Jet, and please scroll to the bottom to view the reverb. Funny. I assume this is an original and not a replacement.

One last digression. In about 1982 Alamo Electronics merged with Southwest Technical Products of San Antonio. In that year I did a pilot software project on a SWTP Uniflex 6809 mini/micro for the state of Texas and demo'ed it for the Governor's office. Ahh, memories. Anyway, SWTP was also a hifi manufacturer of note and deserves some attention from the Stereo Club at some point in the future.
Posted by Nat at 7:28 PM 6 comments:

I guess I should supply a warning: serious technical wonkery ahead.

Paul, a member of the Stereo Club before it even existed, sent me this marvelous link on the topic of HD radio self noise, otherwise known as digital side band hiss. The author is Brian Beezley. This is a very dense exploration of the effect and its mitigation, complete with 8 by 10 glossy photos and a list at the end of vintage tuners that might avoid the issue to some degree. Highly recommended despite the trepanation required to relieve the pressure on my brain.

I have this tuner and the specs documented on this site are true. Reception of analog signals is unbelievable. It isn't the best sounding tuner but its front end and IF selectivity performance is without parallel. Simply put, I receive, in stereo, stations I've never heard on the dial before. It's a cheap $100 plastic box and HD radio isn't the best sounding for FM but as a signal grabber, it's truly amazing.