I've owned and serviced quite a number of pieces of tube audio gear over the years. I've even owned more than a few bits of tube gear in the past that are quite sought after these days. Many were were a mixed bag to own and feed. Especially when the output stage becomes unstable, and eats an expensive set of tubes. My goal was to create something simple and musical. Hopefully, it wouldn't cost an arm and a leg.

Anyone who has built just about anything from scratch will tell you that the cost of materials and labor far outweigh the cost of an assembled product from a store shelf. It certainly turned out to be the case here. A pretty decent power amp could be purchased just for the cost of just the resistors and capacitors in this particular amp. Holco precision resistors, and Sidereal poly capacitors did add up. Throw in teflon coated silver stranded wire, and silver plated ceramic tube sockets, and cost added up even more.

The start of this project began with a set of transformers from an old Sansui unit. They were in great physical condition, and well suited for a project like this one. The output stage takes cues from both the Sansui they originated from, but from some Fisher influence as well. Unlike many common cathode designs of the 60s, I chose a simple self bias approach used in a smaller Fisher 6L6 based amplifier designed many moons ago. No tweaky bias adjustments needed at all.

Looking to cut costs somewhere, I discovered that the Pilot company used a simple 12AX7 tube for each channel of a power amp delivered in the 1960s. Half the dual channel tube used for the input stage, and the second half for the driver/phase splitter. The credit belongs to these trailblazers, and not me. The result is a musical amp that won't cost your entire rent check to feed with tubes. The cathode bias approach definitely squeezes a long lifespan from the power output tubes. Common cathode proponents might claim tighter bass, and a few more watts of power, but I say the trade-off is well worth it.

This amplifier is currently on display at Austin Stereo in Austin Texas.
Posted by Pixelriffic at 3:12 PM 2 comments:

Produced around 1973 to 1974, this vacuum tube preamp definitely raised the bar for the state of audio gear. Many manufacturers had already made the transition to solid state circuitry for their entire model lines. Audio Research (often referred to as ARC) would soon follow with their own solid state audio amplifiers. The basic design of this preamp would continue to evolve for years to come, and carried on in models like the SP6, SP8 and SP10.

Features like a cathode follower buffer stage, a bypassable tone circuit, and a solid state voltage regulator were among the unusual features offered by the SP3. While not new features, few preamps (if any) at the time combined all of them. Add to this a large number of inputs, and a set of AC power outlets on the back that can switch 1200 watts of consumption via a separate power switch. This is great, and even necessary, when using this unit with a solid state power amp. A tube preamp should always be powered on first, and switched off last. Even with modern gear, it's wise to follow this advice.

Of course sound is where the rubber meets the road, and this preamp does not disappoint. Even compared to modern offerings, it can hold it's own. Especially when compared to less sophisticated designs.

This particular example is currently on display at Austin Stereo, in Austin Texas.
Posted by Pixelriffic at 2:36 PM 1 comment:

Dude, yer slackin on the blog!

Ah, yes. True. I am now wrapping up week 4 of respiratory distress. And before that was the food poisoning. Normal blogging activities will resume when I can breathe.

But I care about the Club's entertainment. How about this: 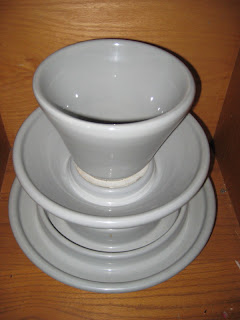 Glad you asked. It's a 38 pound, bluish gray, extremely high voltage ceramic insulator. That some idiot was using as a planter. Please, show a little respect for an industrial objet d'art. It comes in maroon as well... but that one needs a bit more cleaning.
Posted by Nat at 5:18 PM No comments: