This statement piece from Sony Esprit was built in February, 1986 and retailed for $1300. This unit clearly spent its last years in a garage since the back half was completely coated in fur. I spent a good hour cleaning it with cotton swabs and fired it up. It came up nicely on the Sencore Powerite, but the drawer wouldn't open: as usual the rail grease had become rail sludge. So, another 10 minutes of swabbing followed by the oil got the door to open. 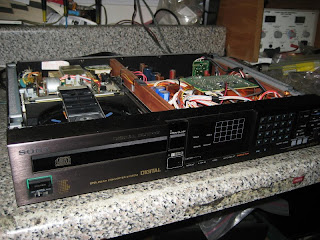 There is almost no information on this player on the web. For comparison purposes here is the write up on a Sony CDP 302 from '85 and the very similar Sony CDP 520ES.

This player is very heavy and chock full of copper. It is also chock full o' boutique caps, mostly Elna Cerafines and a few Blackgates. There are 6 op-amps in the analog stage that have copper heatsinks mounted on top, which can be seen at the upper right of the picture below: 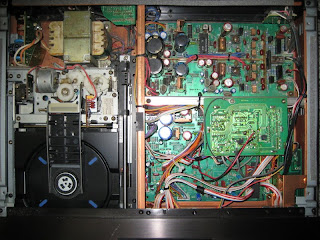 The transport is complex: 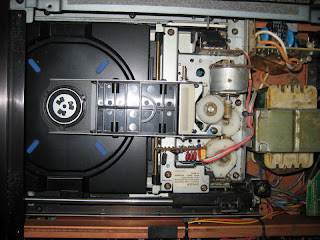 The drawer action was a bit slow and it skipped occasionally, so we opened the bottom: 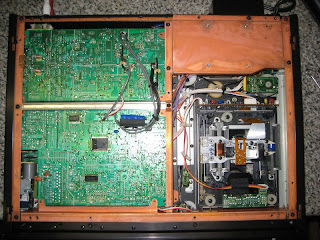 Mike said the skipping was caused by a sticking sled, and he was correct. The 650ESD played very nicely post lube. I changed one belt, somewhat unsuccessfully. The second was trickier to remove so I blew it off. My choice of replacement belt was not very good, the drawer action was actually worse afterwards. It will have to wait until next time.

Here is the bottom of the transport. The laser is on a sled that slides front to back, right to left in the photo below. The two belts are at the left, around the white plastic pulley. 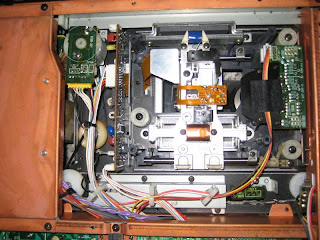 This 650ESD is noted as the first cd player with digital out and it is housed in a pod sticking out of the back. Odd. The switch says 'On', 'On (For Audio Use)', and 'Off'. I am not exactly sure the how the two 'Ons' differed. And it has 3 play modes, I am not sure how that works. I might actually have to procure a manual and suffer the resulting testosterone loss. 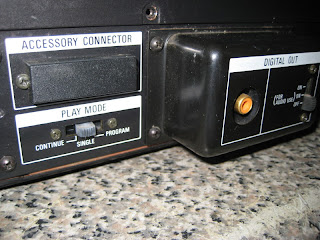 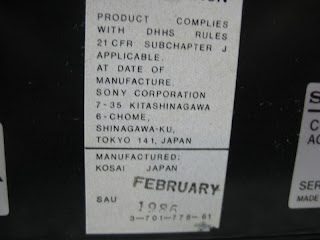 This is a spectacularly designed and built player. I am not sure what is next beyond belts. There are a few caps that could use a freshen-up, but it is tough to replace Cerafines with anything other than Cerafines. Time to do some research.
Posted by Nat at 6:53 PM 5 comments:

Not much to write, but here are a few interesting photos. First up, a CM Labs 911 solid state power amp. Orion says it's from the early 70's but it looks very 60's. 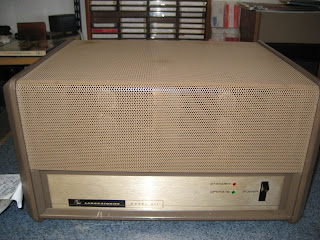 The sides are cast: 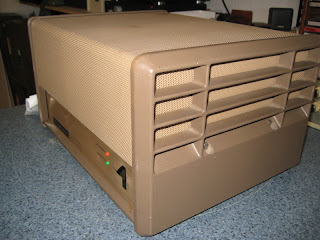 According to Mike the build quality is superb, akin to McIntosh of the era. 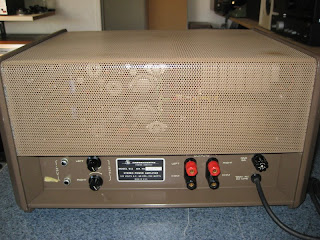 UPDATE: Rummager has commented on the Bozak and CM Labs connection. Here is a very interesting web site by Bob Betts, several times chief engineer for Bozak. It includes a photo of Wayne Chou. The name CM (or C/M) Labs was a contraction of Chou and Morris. Here is a link to a DIYAudio wiki with information supplied by Wayne Chou. The above amp is from 1966 (!) and was named after the Porsche. CM Labs even produced a speaker, the CM-15, that was designed by Houston's own Louis Erath. (One of these days we hope to have a long write up on Mr. Erath. We have a source!) Thank you for the tip.

Next up, my very early Sansui mono pre/power combo. I assume this is from the 50's. The label on the front says this is an FM 15. 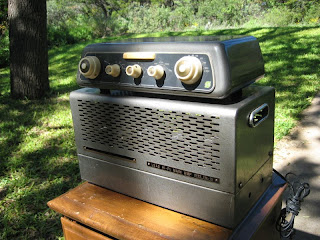 The outputs are 6V6. Note the substantial and lovely output transformer: 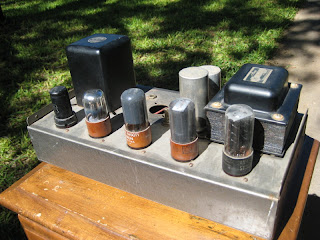 And last but not least is the volunteer papaya plant growing in the alley behind Austin Stereo: 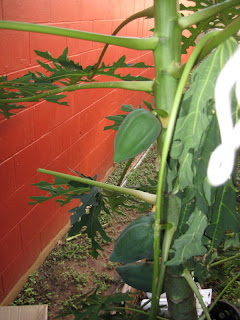