I was vaguely aware, back in the day, of the CD graphics player, but the whole idea seemed... odd. Pumping a still picture to my tv while listening to a cd just seemed something less than a thrilling use for my entertainment dollar. Karaoke is obviously not in my bloodstream, I guess. In recent years I have seen one or two cheapish Memorex cd graphics players on the hoof, but they never seemed of a quality worth examining. Recently I found the well built JVC XL G512 (G12NBK on the back! The mind boggles...) cd player that seems to be a different animal. 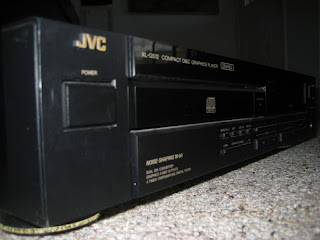 Wikipedia summarizes the CD+G format nicely, and here is one of the web's magnificent obsessives who happens to specialize in the format. Where would we be without these guys? Without the web he would be an obscure crank, but with it he is transformed into a historical resource. May I offer a tip of the Hatlo hat!

JVC cd players have never been on a wish list, but I stumbled on this one and was intrigued. It was heavy and from August '89, good signs. Orion says it was 500 bucks new, a non-trivial amount. It was relatively clean and reasonably complex, so how could I say no?

I took it by Mike's and popped the top and was happy to see innards of substance: 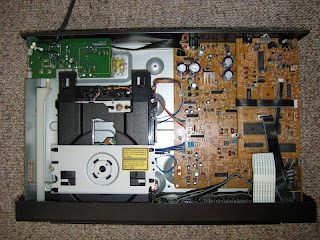 The transport was definitely a cut above, as was the laser assembly. It worked flawlessly and sounded very good. Note the two boards on the right. The smaller board on top is the video board with video, S-video and midi out. Might I say far out. Underneath is a real main board with a significant number of film caps, always a sign someone in Japan truly cared. The front advertised 'Noise-Shaping 18 bit', '4 Times Over Sampling Digital Filter', and 'Dual DA Converter' so this was evidently a serious attempt at a quality player.

One negative: the top was among the chimpiest flimsiest I have ever encountered. In a way it was encouraging: all the heft was in stuff that mattered. But beware, it will bend if you look at it wrong.

Many modern dvd players function very well as cd players, the theory being the technological bump up to handle higher bit rates inherent in movies requires better digital to analog converters. Mere music is a walk in the park, so to speak. There are lots of dvd mod'ers out there taking advantage of this by souping up their analog sections for a great sonic bang for the buck. Perhaps the XL G512 enjoys a similar benefit with the addition of the cd graphics capability kicking the quality up a notch. I did not have a chance to pull the video board and check the main board out in full, but this might be a very interesting candidate for a cap upgrade.

Update: my fellow poster has pointed out my inadvertent slur of the noble bonobo. Sometime in the past 'chimpy' entered my vocabulary as some sort of amusing amalgamation of 'chintzy' and 'wimpy'. It has now been corrected. For what it is worth I straightened several significant dents with my thumb. Flimsy it is.
Posted by Nat at 8:26 PM 2 comments:

Gearhounds tend to have a bit of a soft spot for interesting technology that was crushed by a disinterested market place. The case at hand: the RCA Selectavision Capacitance Electronic Disk (CED) video system. Released to the world at roughly the same time as the Laserdisc and its optical pick up, the CED system actually uses a needle that tracks the disk and renders the movie via modulated capacitance. Really. I am not capable of making this up. Ok, I am, but I swear I am not.

RCA Selectavision seems to have lived from 1981 until RCA was purchased by GE in 1986.

One still occasionally comes across the interestingly packaged 12" disks in thrifts, usually Butch Cassidy. The disk actually lives inside the hard plastic sleeve until loaded into player. The sleeve is removed and the disk stays. But the players are very rare these days. Until two days ago my last encounter with a player was about 10 years ago. Laserdisc players are much more common, maybe approaching 100 LDs for every Selectavision player that I have ever encountered in a thrift. Selectavision died young compared to laserdiscs.

A few days ago I found an RCA SFT 100 in very good condition for $4.20 after my my 30% senior discount at Savers. (I was shocked to see that this same player went for $305 on ebay recently. Wow.) As a resident in good standing at the Home for the Easily Amused, I made the purchase and took it by the Home, otherwise known as Austin Stereo Service. 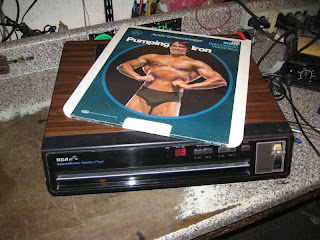 Mike happened to have a few disks around and 'Pumping Iron', the movie that eventually led to the bankruptcy of California, was tried out.

After a few missteps akin to Gerry Ford eating the corn husk with the tamale we fired it up and it worked! 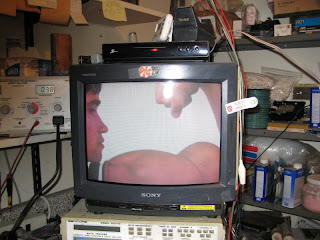 Here is Arnold's bicep attempting to devour Mike's tv. The observant among you will note that the player only draws 38 watts while pumping Arnold out to the screen. The picture quality was quite good. This format's ability to fast forward is truly astounding. You can rip to the end of the video in seconds in non-display mode, and fast forward display retains its video quality.

All in all this player was a great addition to the Stereo Club collection. Now we all need to pull those Selectavision disks we have been saving out of the closet and see how they look... 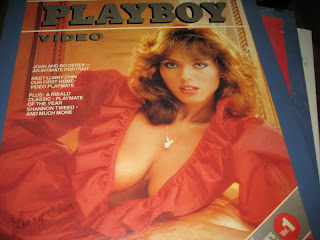